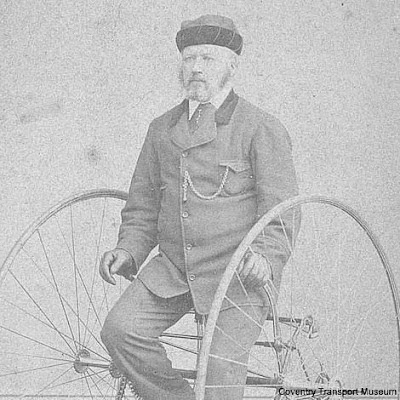 James Starley (1830 - 1881) is considered to be the "Father of the Bicycle Industry." Born in Albourne, Sussex in the South of England, James Starley (Above.) left home at eighteen years old and took a job as a gardener.

Starley’s employer, John Penn, bought an expensive sewing machine for his wife, which broke down. James of course fixed the problem and, what is more, envisioned improvements to the mechanism.

Penn knew Josiah Turner, one of the partners of the makers of the sewing machine, and in due course Starley was taken on as an employee at the London sewing machine factory.

His talent was such that Turner and Starley started their own sewing machine company around 1861. The pair moved to Coventry, in the West Midlands of England, because of the abundance of skilled machinists there. Coventry had previously been known for its clock making industry. 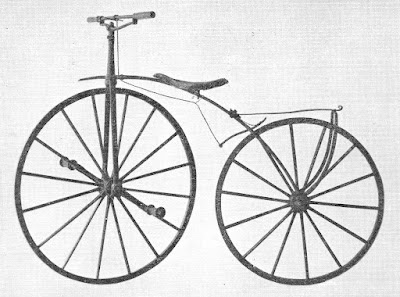 Once again a chance happening steered the company in a new direction. Turner's nephew brought a French Velocipede, (Above.) commonly known as a boneshaker to the factory in 1868, Starley again saw room for improvement and the company soon started making bicycles. 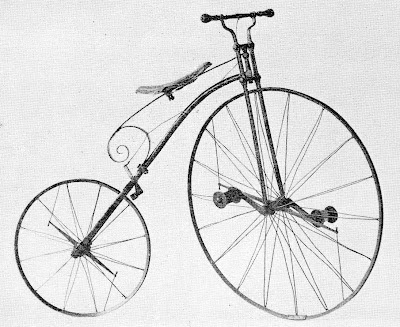 The Ariel evolved into the Ordinary or Penney Farthing bicycle, as the front wheel became larger in a quest for speed. James Starley would later partner with William Hillman to produce the Ordinary bicycle and also tricycles.

Steering problems, while riding a side-by-side tricycle tandem, caused by the unequal power input of the ageing James on one side and his stronger son on the other that prompted James Starley to invent the differential drive in 1877. This also solved the problem of the different speed of the inside and outside wheels when cornering. The differential was ready and waiting when the motor car needed the device.

Also brought into the bicycle manufacturing business was James Starley's nephew John Kemp Starley who would later start his own company in partnership with William Sutton. The early tricycles that John Starley worked on with his uncle were lever driven; later models were chain driven. 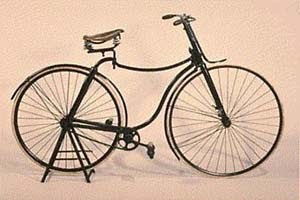 This chain drive would feature in John Kemp Starley’s “Rover” (Above.) safety bicycle first built in 1884. The Rover had 26 inch wheels that are still a standard size today, and although the frame did not have a seat tube, the diamond shape is basically the same as bicycles built today. 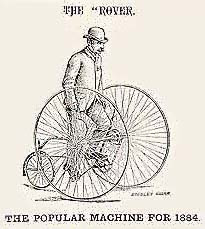 The name Rover had been previously used on a James Starley tricycle, (Left.) however, the name really suited the new bicycle as it freed the people to “rove” all over the countryside.

Others had experimented with chain-driven "safety bicycles" but the Rover was really the first practical model. It made its mark to the extent that "Rover" means "bike" in some countries such as Poland.

In due course, motor-driven bicycles became motorcycles and were followed by motor cars. John Kemp Starley experimented with an electric tri-car around 1888 but the petrol-driven Rover 8 h.p. car was released in 1904, two years after his death.

The Rover car company still exists. (Although throughout the years, it has been under different ownership.) Today they produce the Land-Rover. 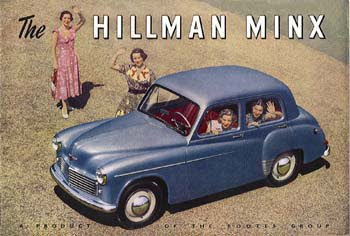 William Hillman who partnered with James Starley to build bicycles, also went on to produce cars and for many years Hillman was a famous British name in automobiles. 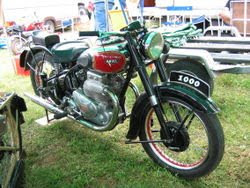 And the first bicycle Starley produced, the “Ariel” became a famous British motorcycle.

John Kemp Starley’s Rover set the standard design for the bicycle that has remained basically the same since. However, it was his uncle James Starley who paved the way for the “Safety Bicycle” with his use of chain drive. This, along with his other inventions and production methods, makes him the Father of the Bicycle Industry.

Assorted Starley bicycles can be seen in Coventry’s excellent Transport Museum. The City of Coventry is well worth a visit for this museum and for the beautiful cathedral.
Posted by Dave Moulton at 6/02/2008 04:58:00 AM

This is a very nice summary. The only thing I would note is that Rover's automotive assets were sold to Chinese interests after bankruptcy, whereas the Land Rover operation is a separate company recently sold by Ford to Tata Motors. The number of bicycle makers that went into the car business is impressive, some with more succes than others: Columbia, Opel, Peugeot, Skoda, Bianchi, among others.

Thanks for posting. Fascinating information about the various "links" and "triggers" that connect all these events. Reminds me of a BBC television show from the late 70's call "Connections" with James Burke. During one show, he tracks the links between the invention of the stirrup and the advent of the atomic age. Thanks so much.