Trail, fork rake, and a little bit of history 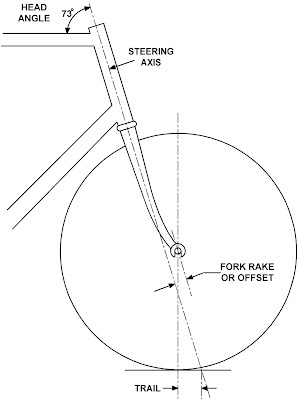 If you draw an imaginary line through the center of your bicycle’s steering tube (Steering Axis.) it will reach the ground at a point in front of where the wheel actually contacts the ground.

The difference between these two points is known as the trail. Trail assists steering; as you lean the bike to the left or right, the steering axis moves in that direction, and thereby turns the wheel in that direction as it pivots on the point of contact with the road.

Trail also assists the bike in holding a straight line. It works on the same principal as a castor wheel on a grocery cart, which goes in the direction it is pushed. (Or in theory it is supposed to.) This is why it is called “trail,” because the wheel trails along behind the steering axis.

You will see from the drawing above, if the head angle is made steeper then trail decreases because the steering axis moves closer to the wheel’s point of contact. Conversely, a shallow head angle will lengthen trail. Bicycles built in the 1930s through the 1950s typically had as much as 3 ½ inches (9cm.) of fork rake resulting in very little trial, often zero. There was a theory at that time that trail made steering heavy and sluggish.

I remember writing an article for Cycling magazine in the 1970s; someone wrote to me saying my theories on trail were wrong, and sent me an early 1950s article from Cycling to prove it. 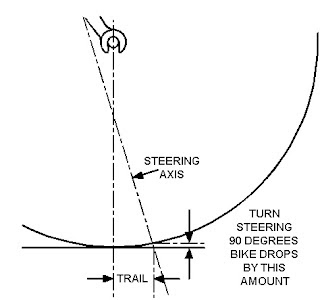 While this statement is true, in practice when riding, the front wheel never turns 90 degrees. In fact during normal cornering the front wheel turns very little, making this whole theory about the front of the bike going up and down irrelevant.

I started racing in the early 1950s and I can say from experience the bikes of that era did not handle and corner near as well as today’s designs. These bikes handled reasonably well because frames were built with much longer wheelbases, wheels and tires were heavier, and tires were fatter.

Road conditions at that time, especially in countries like Italy and France were often appalling. The long fork rake and the long wheelbase had a dampening affect on the rough road conditions. 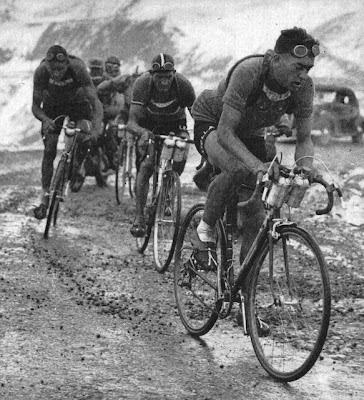 As road conditions improved, bikes were built with shorter wheelbases and at the same time tires became much narrower. It eventually became necessary to increase trail to keep the bike going straight.

There was a somewhat chicken and egg situation with regard to shortening wheelbases and adding trail. In my case I shortened the fork rake to shorten the wheelbase and found the resulting increase in trail was an improvement.

Other older established builders, still clinging to the little or no trail theory, shortened the fork rake but at the same time made the head angle steeper to maintain the trail status quo.

This made for some very squirrelly bikes being built in the 1970s, with 75 and 76 degree head angles and front wheels almost touching the down tube. Shorter chainstays to shorten the rear end of the bike were pretty much universally accepted.

A shorter wheelbase means the bike will turn on a tighter radius. Think of a school bus and a compact car, which one will turn tighter? The front wheel turns less on a short wheelbase bike on any given corner; this translates to having to lean less to get around a bend.

I think the big advantage I had was that I was still actively racing and could try out these changes, and experience the difference first hand. Eventually everyone agreed that trail was not a bad thing and head angles became sensible again.

Frames I built had around 2 ½ inches (6.3cm.) of trail. In the early 1970s I did experiment with more trail but found that the bike felt sluggish and had a tendency to wander when climbing or sprinting out of the saddle.

Very, very cool indeed! I know realize why slightly bent forks make that which rolls sluggish%( Thanks for posting this.

OK, not quite on-topic, but someone with your knowledge base can help answer a question I have about fork rake.

I have a frame that has a fork with a 44mm rake, and I want to switch this fork to a 45mm rake Onzo Pro. I know fork rake differences can alter the ride of a bike, but will the 1 mm rake difference between these forks matter much at all?

Dave,
Came upon this through your archives. I wanted to ask you if you know of a simple, accurate way to measure headtube angle relative to the horizontal. That'll be really helpful as I'm trying to figure out my bike's dimensions, trail, rake etc.

Sorry my comment is so long after your posting. first thanks so much for sharing your knowledge and experience on this ! would like to share mine.. and if you have any feedback insight it would be great. I have experimented a little with rake and trail, having made forks and retrofitted on existing frames(73 head angle ? or thereabouts, didn't mess with varying head angles ).

Now according to some framebuilders, longer trail is "more stable" for touring bikes, less trail is more "twitchy" for racing bikes. [yes terms that are subjective and not really measurable]. So to adjust my fork rake, i simply installed the fork and rode the bike. Hmmm feels very unstable, so if I follow the above logic, the fork needs less rake, more trail. so I bent the blades back a 5mm or so. Re-rode but it made the bicycle even more unstable. It didn't take me long to realize the more trail (less rake) made the bike with very quick steering, whereas the shorter trail gave a more stable bike.[although once again, stable for me may be unstable for someone else? measurable terms need to be defined...] I rode the bike for a while with this long trail. I did get use to it and have to admit I really like the increased cornering "comfort". I don't know if I could have actually cornered any faster but holy cow it sure felt like it, it would just roll into the corner and say give me more. Whereas i use to move my hands to the drops if above say 40 approaching a turn, with this bike i was in absolute comfort keeping hands close in and staying in a full tuck, because it would respond so nicely to small steering input. I finally increased the rake again to get rid of some of this "twitchiness", expecially for pack riding. Plus it was always a let-down switching to track bike, cause the track bike felt sluggish in comparision. Bicycling Science 3rd edition finally has a really nice writeup on steering. Dont expect any simple answers, it is interesting that even today it is a hard problem, and even the author of that chapter (Jim Papadopoulos) mentions right up front that human interaction/ feedback / perception is important possibly more accurate than any modeling... I know from personal experience i have been able to easily ride any of my bicycles with significantly different trails ( maybe 20-40mm difference,ok not huge..), although it take some getting use to. I do like steel forks for the reason that the steering can be easily tuned. And if you want an awesome cornering bike, increase the trail (decrease rake) some.