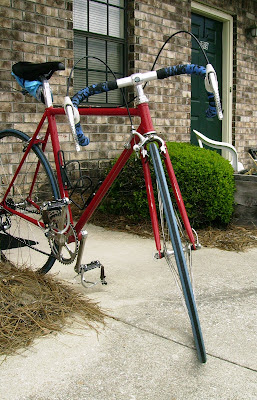 If the head angle of a bicycle was vertical (90 degrees.) when you turned the handlebars to round a corner, the front and rear hubs would remain in the same plane.

Because the steering tube on a road bike is angled forward, usually at an angle of 73 degrees, when the steering is turned, the fork blade that is on the inside of the turn drops and the other side raises. Therefore the front and rear hubs are not in the same plane.

Because the front wheel is leaning slightly more than the rear wheel, it is turning at a slightly tighter turning radius, creating over steer. This is a good thing; centrifugal forces are pushing the bike wide on the corner, over steer is counteracting this.

Now try this demonstration. Hold your front wheel vertical with both hands while turning the wheel to the left or right. You will notice the bike will lean in the opposite direction to the turn. (Left.)

As stated in the second paragraph above, when the steering is turned, the fork blade on the inside drops. Only this time it cannot drop because you are physically holding the front wheel vertical. Instead of dropping, it pushes the bike in the opposite direction.

Imagine you are riding your bike at speed in a straight line and you want to make a sharp right hand turn. Because you are riding straight the gyroscopic action of the spinning wheels, plus your own weight and momentum, is holding you vertical just as surely as if you were physically holding the front wheel.

When you reach the point where you wish to turn right, nudge your handlebars slightly to the left. (Hence, counter steer.) A good way to do this initially is to push the right side of your bars forward, thus steering left. The slightest touch is all it takes to immediately push the bike over into a right hand lean and the bike steers itself around the corner.

2.) Because the front fork is bent or raked forward, there is more of the wheel ahead of the steering axis than behind it, and its own weight will cause it to turn in the direction it leans. In addition, the weight of the handlebars is in front of the steering axis. You can demonstrate this by leaning a stationary bike, the front wheel will turn in the direction it is leaning

It has been established since at least the 1930s that the ideal head angle for a road bike is 73 degrees. (Give or take a degree either way.) Track bikes designed to be ridden on a banked track or velodrome are a different matter.

The banking of the track counteracts the centrifugal forces of turning. In theory the bike is at 90 degrees to the track surface when traveling at speed, and acts as if the bike were traveling in a straight line with no corners.

The only time a rider needs to deviate from a straight line is to go around an opponent. The rider needs to be able to physically steer around another rider without throwing the bike into a lean to the left or right. Steeper head angles of 75 or 76 degrees achieve this characteristic, along with less fork rake and less trail.

So how will a track bike handle on the street when it is designed for a banked velodrome? Not too badly actually. The steeper head angle is going to make the steering more sensitive, it may call for smooth pedaling to keep the bike going straight.

On the other hand the steeper more sensitive steering needs less trail to keep it straight. It may not corner as well as a bike designed for the road, but as long as a rider is experienced and considers this, there should be no problem.
Posted by Dave Moulton at 4/09/2007 04:52:00 AM

I have also heard this kind of steering, where you first steer the opposite way you're turning, called a forced turn.

thanks for this blog. i am learning so much here. And hopefully becoming a better rider because of it.

How you steer a two wheel bike becomes very easy to understand when you try to ride an upright racing trike for the first time.
Leaning into a turn and countersteering will result in a racing trike going dead straight twoard the nearest wall.

This has to be a triumph of the will surely...surely you'd just fall off the bike?

An "upright racing trike"? I have never heard of this competitive sport before .....