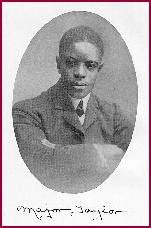 February being Black History month, I wanted to remind everyone of this remarkable athlete.

Major Taylor was the second black world champion in any sport, after boxer George Dixon. The Major Taylor Velodrome in Indianapolis, Indiana and a bicycle trail in Chicago are named in his honor. On July 24, 2006 the city of Worcester, MA changed the name of part of Worcester Center Boulevard to Major Taylor Boulevard. 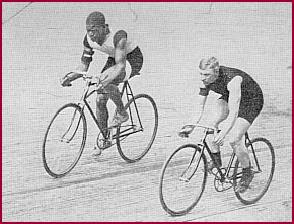 When I started cycling in England in the early 1950s many riders had only one bike that was their transport to and from work, and at the weekends, the same bike would be used for racing. Alternatively, they would put mudguards and a saddlebag on it and go touring.

Because of this, many used a handlebar stem that was adjustable for length. It was known as a Major Taylor stem. For years I had no idea who Major Taylor was, and when I came to the US in 1979 there was still little information available about him.

This has changed in recent years thanks to the Internet. You can learn more here:

Thanks for the plug about da' Windy City! There's also The Major Taylor Bicycle Society that supprts under-served youth on the South Side.

qlGreat information. I checked out the websites you listed and plan to read more later,

There is so much history that I'm unaware of. Thanks so much for sharing.

I highly recommend the book you link to. He was a fascinating guy.

Up here in the Twin Cities, we have a Major Taylor Bicycle Club that is pretty active.