Why is my Front Brake Lever on the Right? 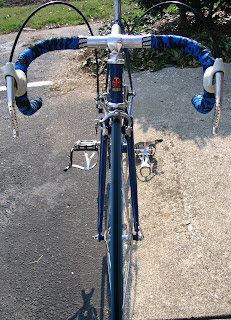 I have been asked that question since I started posting pictures of my bike on this blog.

It came up again when I posted a picture of my now wrecked bike last Thursday.

Why is my front brake lever on the right?

The simple answer is that I have always had my brakes set up that way since I started riding back in the 1950s, and it is what I am used to. 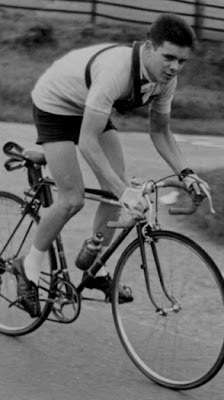 I did not put the front brake on the right just so the cables would cross, but rather followed the style of the day and did what people with far more experience than I had, were doing.

As I remember, it had a lot to do with the fact that both front and rear derailleurs were shifted using the right hand, leaving only the left hand to operate a brake.

The front derailleur was operated by a lever whereby you reached down between your legs with your right hand. Now dubbed, suicide shifters, although I don’t recall this ever being a problem. 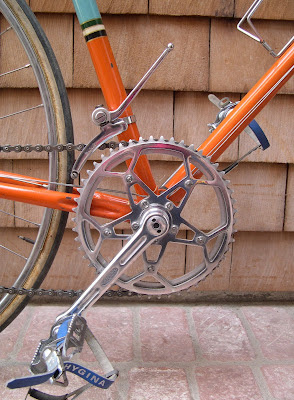 The picture on the left is of a Huret front derailleur that was very popular in the 1950s.

[Picture from The Racing Bicycle.com]

Campagnolo did not come out with a brake set until 1971; when they did, it was opposite to the Weinmann and most other side-pulls of that era. It had the front brake caliper arms on the right.

Campagnolo quickly became the brake of choice among racing cyclists and enthusiasts world wide, and as a result, other side-pull manufactures copied the Campagnolo style.

There is also a theory that the English, front brake on right set up, can be traced all the way back to the Ordinary (Penny Farthing) bicycle that had a single spoon brake on the front wheel only, operated by the right hand.

Early "Safety" bicycles had the same front brake only set up, so when rear brakes were added later, people were already used to having the front brake on the right.

Old English roadster bikes with roller brakes had the front brake on the right. The explanation for this could be as simple as the rod operating the rear brake went down the left side of the frame to keep it clear of the chain and chainwheel on the right side.

Some could argue a right and a wrong way to set up brake levers, but I only speak for myself when I say I continue to set mine up the way I always have. Simple as that.
Posted by Dave Moulton at 12/24/2006 05:30:00 AM

Dave, like you, I started serious cycling in England in the fifties and when I got back into it in the seventies on this side of the pond, I found there was something "wrong" with the bikes I bought and had to switch the brakes.

After some research I've found that it's the CPSC that has mandated that the front brake be on the left in America. The only reason I can think of as to why they would think this is "safer" is that since the early part of the last century most mass market American bikes had coaster brakes acting on the rear wheel and this was considered the primary brake. Since we drive on the right and use the left hand for hand signals, it makes sense to have the right hand available for the brake. That's fine with me, because the front brake is my primary brake. Interestingly, my parents told me that coaster brakes were the norm in continental Europe also, but I never encountered any in England. However, the "great unwashed", who watch reality shows and drive SUVs probably prefer the rear brake. From the safety standpoint, the result of a panic stop locking up the front wheel or the rear wheel, going over the handlebars is probably more dangerous. However, I think that one would have to develop a really educated left hand to modulate the front brake safely.

You bring up some interesting points I hadn't considered, such as shifting gears. My Claud in England only had four gears, no "double clanger" (does that stir up memories?). I've always shifted with my right hand; even reaching over to the downtube mounted front shifter. Of course, it's not likely one would need to use the brake(s) when shifting gears on a bike.

I guess it all boils down to personal preference. At least the CPSC allows brake position to be changed if the customer desires. In my case, I like the front brake on the right and that is reinforced by my experience with motorcycles. I'm surprised that the safety folks could not get together on this after ruling that motorcycles should have the gearshift on the left, opposite to what the British, Italian and some of the Spanish had been doing.

I'm sure i only have a fraction of the cycling experience that you have but i find front brake on the left is the only way to go. I've been training and racing on an old Concorde bike with downtube shifters and being right handed i do nearly everything with my right hand. Changing front and rear derailers, grabbing water bottles, playing with my cycle computer, etc. are all done with my right hand. That leaves my left hand on the handlebars and always ready to stop (using the "main" brake) in a hurry if i need to. Off-road on the mountain bike i can modulate the front brake better with my right hand but on the road when my right hand is doing other things i find it much safer to have the front brake on the left. Especially when i have a water bottle in my hand and some idiot motorist turns right (i live in Australia) in front of me.

I find this very interesting as when I first started riding a road bike seriously, I had the brakes switched so that my front brake was on my right side. My reasonings for this change were as already mentioned: shifting on the downtube with my right hand, reaching for a water bottle with my right hand and simply said, if I was going to have to put on the left side brake abruptly, I wanted it to be my rear brake and not my front. Unless I had on my Superman pajamas while riding the bike, I did not wish to go flying over the handlebars due to an emergency stop. I guess you say I finally found my way as I no longer use that perference and have succumbed to ways of mere mortal men.

I like the front brake on the right so i can use it, the most effective brake with my most coordinated hand, while using my left arm to signal my intentions to nearby motorists.

I worked in bike shops in the early to mid 1980s when everyone put the front brake on the left. But in the summer of 1984 I worked in a small shop in Cambridge, Massachusetts, that only sold Fuji bikes (it was called 'Life Cycle'. And the owner of that shop insisted that we assemble the bikes with the front brake connected to the right lever. If I remember right, it was because that's what he was used to from motorcycles. Anyway, it confused the hell out of our customers.

After living and racing in UK until I was 30, I now live and race in Switzerland.

Bikes in UK were factory fitted front/right, rear/left - including the rod braked roadsters - and most riders building their own bikes (out of separate parts - to avoid purchase tax...) followed the same principle.

When you brake, the weight vector goes forward increasing weight on the front wheel and the grip of the tyre. The front brake is far more effective than the rear. The rear wheel have less weight on it in this situation and less grip. For this reason cars are fitted with a rear brake restrictor to prevent lockup at the rear.

Watch GP motorbike riders - they have two brakes but never touch the back one at speed... There were old wive's tales about going over the top if you only braked at the front but this is rubbish.

If you can only brake on one wheel for some reason it should be the front wheel, because pulling on a back brake only causes a skid. As a lad I found this out the hard way as I was carrying newspapers in my right hand and had to stop downhill using only the left...

In UK, where you ride on the left you may well get in the situation of slowing and turning right, which requires a signal with the right hand...

It would make a lot of sense to have front/right in a right hand drive environment - and the Italians did it for a long time (check Pantani - Gimondi etc) but the French and Germans didn't. The Swiss deliver bikes set up the French way but some southern riders change this.

Either way it is nonsense for a law to tell riders where to have their brakes!

Well I bodged up that post - sorry - towards the end I should have said:

In UK, where you ride on the left you may well get in the situation of slowing and turning right, which requires a signal with the right hand...

Well, I live in Finland now after spending most of my life in UK and Australia and learning to cycle in England - I only realised my brakes were set up "the wrong way around" (front on the left) when I went over my handlebars a couple of years ago. Now I have the brakes switched (until next time I go over) Graham :)